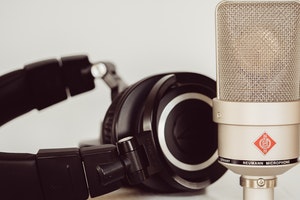 Many voiceover artists don’t want to talk about the moments in their careers when they were less than perfect, but often we learn more from our failures than our successes. The posts that seem to get the most engagement for me on my Instagram aren’t the ones where I’m sharing my work or talking about all the jobs I’ve booked. The ones that people seem to appreciate most are the ones where I challenge long-held beliefs about our industry or the ones where I fell short of voiceover success. Voiceover can be a lonely business, and it’s easy to forget that all the positive stuff we see on everyone’s social media is NOT the whole story. Sometimes, I like to shake things up by sharing the stuff that other voice artists would probably keep to themselves.

This is the story of the first time my voice was replaced. A long time ago, when I had just started dipping my toes into voiceover work, I recorded a 30-second commercial spot at a radio station. As was my custom at the time, I followed up a week later with the sound engineer to ask for a copy of the produced spot (because back in those days, that’s how you created a demo – from jobs you’d recorded that had been produced and gone to air.) The sound engineer very kindly obliged and emailed the spot to me.

My Story to Voiceover Success

For those who don’t know me and my story (and apologies to those who know this already and are sick of me talking about it), I am originally a theatre-trained actor. I studied theatre acting full time for three years at university before beginning my professional theatre career. But voiceovers? I am about 98% self-taught. Most of the workshops & classes I’ve attended have occurred in the last three years. So the transition from theatre actor to voiceover actor was a slow one for me. Back when I started 20 years ago, home studios were not a thing. Voiceover classes were not a thing. So my development as an artist consisted of a lot of listening.

Listening to commercials on the radio and the tv, and then (if I was alone) trying to emulate what I was hearing. Those first few years, I spent a lot of time listening to the demos of other voiceover artists whose work I rated highly. Listening and parroting. Then waiting for my next voiceover job so I could get behind a mic and give what I thought I might’ve learned a go. Of course, there are much better ways to develop voiceover skills these days, but that’s how it was for me.

So I opened the email containing the mp3 copy of the ad I voiced. I played it eagerly, hoping it would be fabulous enough to add to my little collection of produced spots to create a commercial voiceover demo. At that stage, I didn’t have one. But the voice in the spot wasn’t mine. Another female voice had replaced me. #awkward

As I listened to the spot, there was no denying my significantly deflated ego. At the same time, I understood why I was replaced. The voice I was listening to was that of a true professional voiceover artist. I could hear a smile that conjured up all the right images for the spot she was voicing. She had the perfect mix of energy to grab and hold her audience and intimacy with the microphone not to scare the audience away. I could see the context of the commercial in my head. Not just because of the sound effects and atmosphere added to the spot by the sound engineer. She had outstanding skills, ones I knew I did not yet possess and would need to achieve that level of voiceover success. And it all sounded so effortless. She was the reason the ad worked. I would have ruined it with my inexperience and bad microphone technique coupled with my incredibly crisp articulation and inability to say anything quietly.

I’d never experienced a side-by-side comparison of my voiceover work with someone else’s.  I knew my work didn’t measure up.

So, I kept working at it the only way I knew how – on my own!

I listened to voiceovers and repeated what I heard. Radio commercials in the car and TV commercials in the lounge room. As well as that, I downloaded voiceover demos on my computer. I listened, observed, and practiced with my hand cupping my ear. Each time I booked a voiceover job, I was slightly better than the last.

Learning is Key to Success

Talk about a drawn-out timeline. I do not recommend this method of slow-mo DIY voiceover skill development. There are faster ways to move forward than just listening to more experienced voiceover artists. Classes and training and workshops in voiceover are now so accessible that no one needs to struggle through on their own anymore. If you mean business about booking more voiceover work, you have multiple options to help collapse that timeline.

Sometimes experiences that initially deflate us can be the ones that drive us forward the most. This one gave me a benchmark to strive for and the realization that I had a long way to go in voiceover. I’m glad to have had it, and I’ll never stop learning and striving to be a better voiceover artist than yesterday.

Sarah Kennedy is an independent Australian female voice over talent with two decades' experience.  She works from her home studio in Brisbane, Australia and is also happy to travel to any studio of choice.  Sarah records all types of voiceovers including eLearning, Business, Corporate, Commercial, Retail, Explainers, Video Games, Animation, Audiobooks, Government, IVR and Messages On Hold.